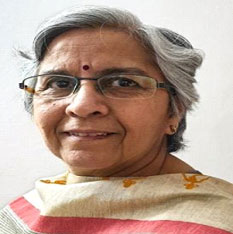 Dr. Sangita Passey was a Commonwealth Scholar from 1994 to 1997 in the University of York, UK With nearly four decades of teaching Mathematics in various institutions under the Department of Training and Technical Education, Govt. of NCT of Delhi with the latter half of this duration spent in an administrative role. Dr Passey has a progressive education vision. She was promoted as the Head of the Department of Science & Humanities in 2001 and has worked as Principal of DSEU Maharani Bagh Campus since 2019. She has publications in National and International Journals and has broadcast a few talks on AIR, Delhi. Students love her innovative and lively approach to teaching Mathematics and her ability to invoke technology to make it easier and fun.

Dr. Passey gravitates towards new learning opportunities and has been actively involved in the RTI and Grievance cells, Internal Complaint Committee of the Institution. She has coordinated the non-formal skill-oriented training programmes for economically weaker sections of society under the CDTP scheme of MHRD, and SJSRY scheme of GNCT of Delhi, and has been the Chief Admission Officer for DTTE for two years in a row.

She is an award-winning player of table-tennis and has been a member of the GNCTD Table Tennis team and participated in the AI Civil Services TT Tournament. She has her own blog (http://ideamasala.wordpress.com), loves to travel and trek, loves both fiction and non-fiction, and is unafraid to speak her mind. Dr Passey is an able administrator, is a positivity-infused professional, and is someone who loves to create opportunities for all who deserve them.
Besides teaching Mathematics and discharging the Administrative roles as HOD (Science & Humanities) and officiating as Principal on several occasions, she has also successfully handled the following assignments: